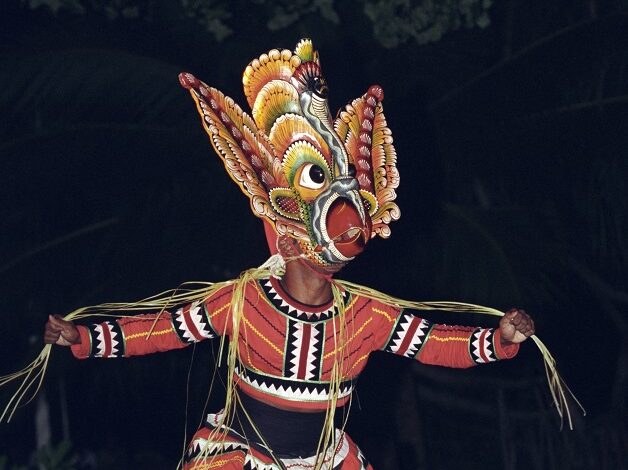 Take a Journey into the Supernatural Heart of Sri Lanka

The Sinhala community of Sri Lanka is characterised by unique magic practices involving a realm of spirits. The God of Gods (or Devati Deva) is Lord Buddha, followed by the Gods (or Devi Davatas) and then other supernatural entities, like Yakkas, Rakshas, Nagas, and powerful spirits, such as Pretayas, Bahiravayas, Bhutayas, Holmanas and Avatharas. Take a Journey into the Supernatural Heart of Sri Lanka!

The Role of The Sri Lankan Magician

These spirits can have a supernatural impact on human beings, therefore it is crucial the role of a mystic figure, the magician. Magicians can interact with spirits in different ways. They can operate white magic, which is protective, curative and productive, and black magic, which is destructive and harmful. They can opt for altered states of consciousness (such as trance, invocation, sorcery or exorcism), animation (through spells, charms or dances), artefacts and offerings or rites and rituals, and their purpose is to either obtain prosperity or destroy enemies.

Buddhism plays a vital role within the Sinhala community. The recitation of Buddhist texts or words of the Buddha is considered white magic to obtain peace or cure sickness.

With the term Pirith we refer to a set of protective chants or runes which can be performed by both lay men and Buddhist monks (bhikkhus). It constitutes a very popular ceremony among the Buddhists of Sri Lanka to protect the individual involved from any type of disaster.

A bhikkhu chants a Pirith tying a piece of the sacred thread (Pirith Nula) around the arm or wrist of the person and using the enchanted noble water (Pirith Pan) by drinking or sprinkling it.

Another important practice involves the Bodhi (Ficus Religiosa), the sacred tree under which Buddha gained Illumination. Bodhi Puja is an individual or family ritual performed to ask for healing of serious illnesses or getting obstacles removed from life.

Gods and Goddesses From India and Sri Lanka

The Sinhala community believes in a large number of gods and goddesses, but only a small number can be considered as autochthonous. Most of them have their origin in the South or South-Eastern regions of India. During some rituals, magicians evoke Hindu gods and goddesses, such as Brahma, Vishnou, Siva, Parvati and Uma, but they also refer to local gods, like Saman, Vibhishana and Skandha. In particular, Saman is believed to be the deification of Lakshman, the brother of Rama, while Vibhishana is the brother of Ravana, who became a guardian god of Sri Lanka. Magicians also celebrate supernatural beings, such as Yama, God of Hell, and planetary deities, such as Sun, Hiru Devi, Moon, Sanda Devi, and Saturn, Senahuru.

Female deities occupy an important place in this system. The goddesses Saraswati, Kiri amma, Kali amma and Pattini amma have their origin in India. Artists are used to perform ceremonies called Saraswati Puja to start their activities, while classical singers usually offer a special song to Saraswati. The goddess Kiri amma is the chief female deity of Veddas, the indigenous group of people in Sri Lanka. As the giver of children to barren women, milk rice is offered to mothers representing the goddess in her different avatars: this ritual is called Kiriammavarunge Dane.

Yakkas, a term which refers to a group of demons and devils, are powerful spirits and superhuman beings which are very popular in the Sinhala community.  The Sinhala masks to represent the Yakkas have some peculiar features: large protruding red eyes, a jutting-out tongue, large tusks, red lips, a wide open mouth and big teeth.

Myths, legends and stories of the Yakkas and descriptions of the ceremony with ritualistic spells, magical formulas and hymns are preserved in Olas and several hand books. Yakkas are very common in magical practices. Ancient Buddhist texts refer to different varieties of Yakkas but it is good to know that some old names and beliefs have changed with time.

The most powerful Yakka is Vesamuni, who drinks human blood and can kill thousands of offenders with his flying sword. All the other Yakkas are afraid of him.  With the term Rakshasas we refer to a group of beings who live on human flesh and blood. In the Sinhala mythology the people of prehistoric and protohistoric Sri Lanka are called Rakshas or Yakkas.

Yakkas can be used by magicians to do harm to a person, family or community.  When evoked, Yakkas can cause sickness, if associated with black magic, or they can cure physical and mental diseases.  The magician is called kattadiya, yakadura, yaddessa or gura depending on the practice he/she is executing or the region.

Yakkas and all Their Forms

Yakkas have the ability to reincarnate into a variety of forms.

Dala (task) Kadawara or Dalaraja is another Yakka which was born in a task of an elephant, as a punishment to his incestuous marriage with his own sister. He strikes the girls with illnesses such as asthma, dumbness, madness fits and flu. In this case, the magician who takes care of it is the yaddessa, who honours the Dalaraja with offerings and dances and invokes him under different names to cure the affected girl.

The Yakka of the rock is called Gale Yaka by Veddas, Gale Deyyo by the Sinhala people and Gale Bandara by the Kandian Sinhala community.

Gale Yaka helps people to get a rich harvest and cure illnesses. Gale Yaka is invoked to remove evil effects when a person constructs a new house or starts a new business. Its mask has a devil face with three hoods over his head, two tusks and ear ornaments resembling the sun and moon.

Huniyam Yaka is also called Huniyam Devata and causes sickness and sterility or miscarriages. He is known as the demon of the worst sorcery. The people use his power to destroy enemies.

Mahasona lives in cemeteries and graveyards. He is one of the most dreadful Yakkas within the Sinhala community. He resides in slaughterhouses, neglected gardens or public baths. People avoid staying alone in these places since they fear to see him. In the Bali ceremonies he is represented with a huge body. The Bali ritual consists of dancing and drumming in front of the Bali figures representing him made by Bali artists.

Pretayas (Greedy Spirits) and Mala Yakshayo (Dead Spirits) are superhuman beings with lesser power. These spirits are dead ancestors who could not get rid of their desires and attachments. They can bring pathological conditions.

When Pretayas look at food (Preta Balma), the person can lose appetite or can suffer from indigestion. To avoid this, people cover the food when they have to move it from one place to another or they put a piece of iron or a lime next to it, especially if they are carrying fried food.

Both Pretayas and Mala Yakshayo do not have any form, people can only feel their smell.

Gevalayas are also dead ancestors who are not willing to leave their house. They make noises, such as closing and opening doors.

Another type of spirit is Bhutaya, which has a physical body, resembling a beast.

Holmana and Avathare appear as temporary hallucinations as dead people who haunt houses, streets or cemeteries.

A demonic ritual called Tovil, which mainly consists of an exorcism, is meant to chase away these malevolent spirits.

Some female demons are called Yakkini or Yakshani. Kuweni  is a powerful Yakkini and is considered a na-yakini, which is an ancestor of the Vedda community. She was the first wife of the first Sinhala king, Wijaya. When she was abandoned by Wijaya, she cursed all the Sinhala kings and Sinhala people. The ritual called Kohomba Kankariya serves the purpose of putting an end to the curse of Kuweni by sacrificing a symbolic wildboar ura marima (trunk of a banana tree).

Balagiri Yakinni strikes children with illnesses. Sinhala people used to write on the door of the house “The curse of the Balagiri is not for today but for tomorrow” (Balgiri dosaya ada nove heta). Mohini is a very popular yakshani. She wears a white cloth and scares young men at night. She is attracted to musicians. Anjanam Devi is a Yakkini who is used as an agent to perform the art of divination. Bhairava Yakkini protects minerals and other treasures of the earth. Bodirima or Bodilima is also a female spirit, a supernatural being. She is believed to be a woman who died in childbirth, buried with the child in her womb. When people hear her groaning, they place a lighted lamp and betel leaves as offerings outside the house.

Nagas (cobras) are semi-divine spirits. They live in the subterranean world. Nagas are also considered as ancestors. They are harmless if they are not attacked. When a cobra is found in a garden, it is better to ask it nicely to go away or to try to put it in a bottle in order to bring it back into the river. If a person does harm to a Naga, it is unforgivable, in fact the proverb states “If you want to kill a Naga do not miss the first shot”.

Other Magical Objects of the Sinhala community

The community believes not only in supernatural beings and the figure of the magician, who has special powers to negotiate with the supernatural realm, but also in the power of invocation. The Sinhala community uses a variety of objects in magical practices, evoking a magic spirit through words, thoughts, objects. They can use hair or nails taken from an individual to perform a ritual, this is the reason why people are always very careful not to leave these elements all around. Clothes and footprints, but also ointments, amulets, natural elements (such as stones), body parts of animals (elephants’ jaws, leopards’ claws) are considered useful to protect from sickness or to bring prosperity.

Talismans are very popular. Every little child is protected by a talisman called Panchaudaya (five arms). The oral power is also very important. Some spells, hymns, wishes, chants and songs such as Vaskavi (songs of malediction) and Seth Kavi (songs of blessing) hint at superhuman powers.

Other objects are used by magicians to make offerings, such as flowers, fruits, coconuts, sweets, boiled rice, oil lamps and incense. In the ritual of Bali and Tovil, offerings can be a particular cooked food or a living animal, such as a rooster. When the wish is fulfilled by the God, such as a child birth, some people offer a “life to life offering” (pranayata paranaya), which can consist of a rooster or plant. All the taboos must be observed to avoid dangerous consequences, such as wearing just white clothes especially in Buddhist ceremonies, ceremonial bathing etc. Both magicians and participants avoid prohibited things, called the dirt and filt (Kili), which can reduce the effect of the magical power.

In the Sinhala community, magic is a social and cultural phenomenon. Magic is part of their everyday life, especially in the different circumstances when they want to eradicate enemies, overcome difficulties, cure illnesses and gain prosperity and happiness.

Sri Lanka is a culturally rich and diverse country. 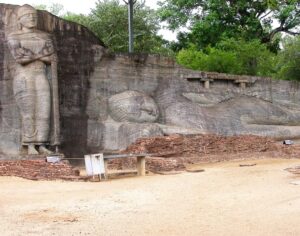 Sri Lanka: a fascinating History marked by its unique Position in the Indian Ocean