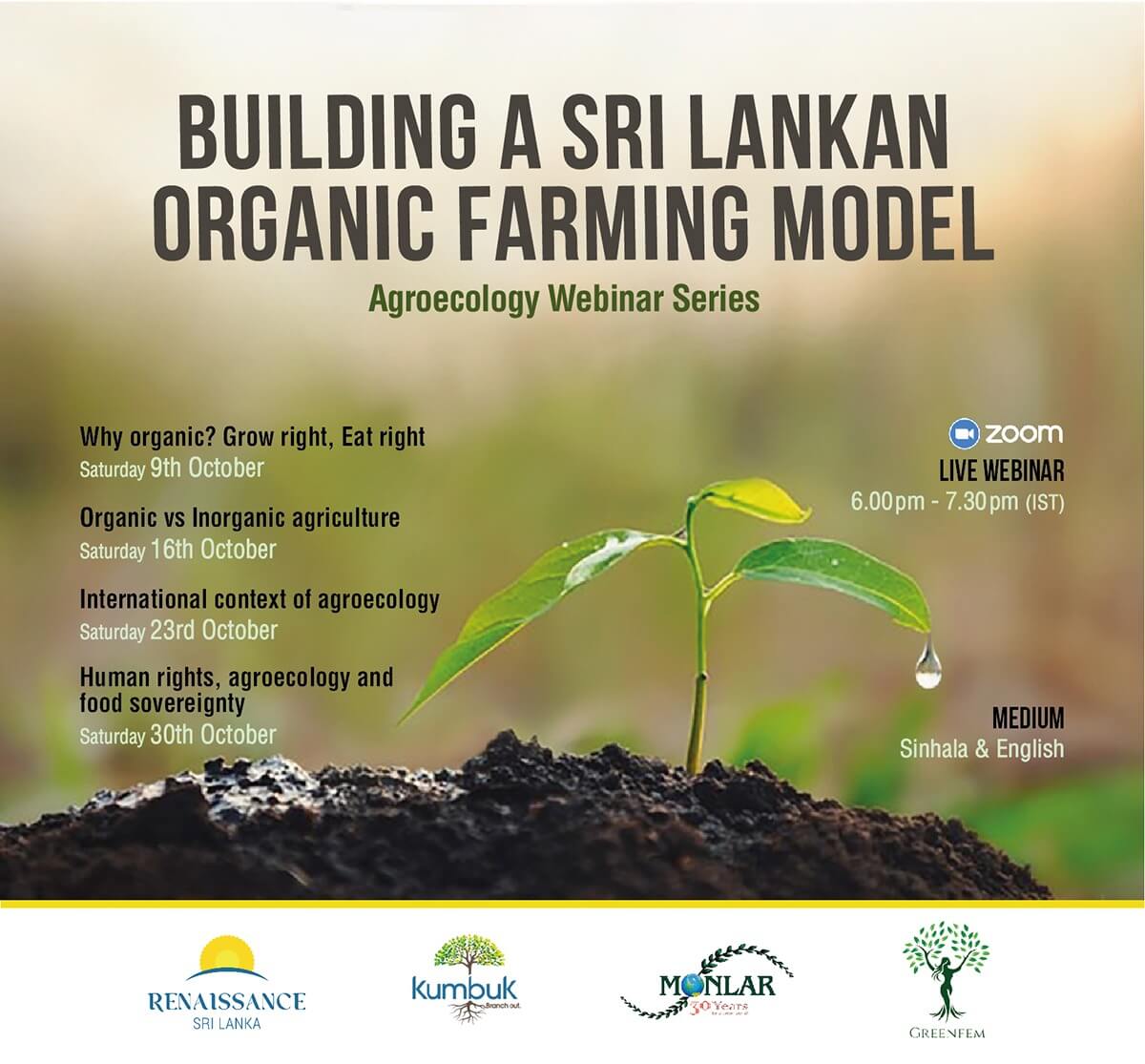 Renaissance Sri Lanka, MONLAR and Greenfem are launching a live webinar series on agroecology. Hosted via Renaissance Sri Lanka’s “Kumbuk” online networking platform, the series will run every Saturday, from 8 October to 30 October, from 6.00pm to 7.30pm IST (GMT+5:30). It will highlight the importance of organic farming with the aim of contributing to a people-friendly true green revolution in Sri Lanka.

After World War II, a ‘green revolution’ was launched globally to increase food production to meet the population’s requirements. The traditional Asian farming methods were transformed into an advanced, scientific agricultural system by the 1960s. Hybrid seeds that produce high yields were introduced, but they highly depended on agrochemicals, resulting in a threat to the people, animals and environment.

The agricultural system introduced by the green revolution created a mass of socio-economic, health and environmental problems. Significantly, the green revolution failed to fulfil the promise of safeguarding small food producers and minimizing rural poverty. Guaranteeing access to food for all, alleviating hunger and malnutrition are other issues yet to be resolved.

In April 2021, the government of Sri Lanka implemented an overnight decision to banning chemical fertilizer and converting the country’s agricultural system into organic farming. This decision astonished many who had been used to the lavish use of chemical fertilizer and pesticides after the green revolution in Sri Lanka in the 1970s that introduced and promoted agro-technology.

The government stated that its policy was guaranteeing the people’s right to access a poison-free balanced diet. Intending to create a healthy and efficient citizen, the government stated that it had decided to use only organic fertilizer in agriculture. The leaders vowed to stand firm on this decision. The reasons outlined for banning the import of chemical fertilizer were health issues created by the pollution of water sources and unknown chronic kidney disease spreading nationwide.

President Gotabaya Rajapaksa urged the people’s representatives to educate the public on the benefits of using organic fertilizer despite the challenges in the transition period.

The dialogue in the society on organic farming polarized heavily with the sudden government decision of banning chemical fertilizer entirely. One sector advocated for systematic transition to organic farming due to the challenge of achieving targets of mass-scale food production. The other section opined that the space opened by this sudden decision should be used to convert the Sri Lankan agricultural system into organic farming, investing in the lack of leadership with a long-term vision.

Against this backdrop, the organizations, farmers and citizens who have been already using agroecology farming methods welcomed the government decision with the hope of creating a sustainable agricultural system in Sri Lanka.

Multiple stakeholders such as agricultural institutes, universities, and organizations conducted many webinars about organic farming.

However, Shamila Rathnasooriya of Movement of National Land and Agricultural Reforms (MONLAR) pointed out that the farmers, consumers, women and youth had not been adequately represented in these discussions handled by the professionals and officials in the agricultural field. He further highlighted that these discussions were inadequate to propose solutions to the problems in the agricultural sector and to present the advantages of the holistic approach of agroecology.

Chathu Sewwandi of Greenfem Organization said, “The Ministry of Finance has relaxed the regulations on the import of chemical fertilizer through the gazette numbered as 2238/45 dated 31 July 2021. The situation highlights the importance of restructuring the dialogue on organic farming.”

The two founders of Renaissance Sri Lanka, Ashinsa Bopearachchi Cavalié and Neville Uditha Weerasinghe said “The series of webinars aims to create a platform to fill the gap between the traditional knowledge on agroecology and its practical application.  Our partners, MONLAR and Greenfem have been practicing agroecology for decades, proving its sustainability. If agroecology is promoted among farmers and implemented in mass scale, food security, good health, farmers’ income, peace and prosperity can be assured.”

The series of webinars will bring together the knowledge and experiences of the international and Sri Lankan experts and the farmers on agroecology.

No need to register, just follow the event page.

4)  Go ahead and implement decision to use organic fertilizer despite challenges
https://www.presidentsoffice.gov.lk/index.php/2021/06/08/go-ahead-and-implement-decision-to-use-organic-fertilizer-despite-challenges/

Keep in touch with what we are up to
© 2020 Renaissance Sri Lanka, 78100, France. Alimenté par Accularity